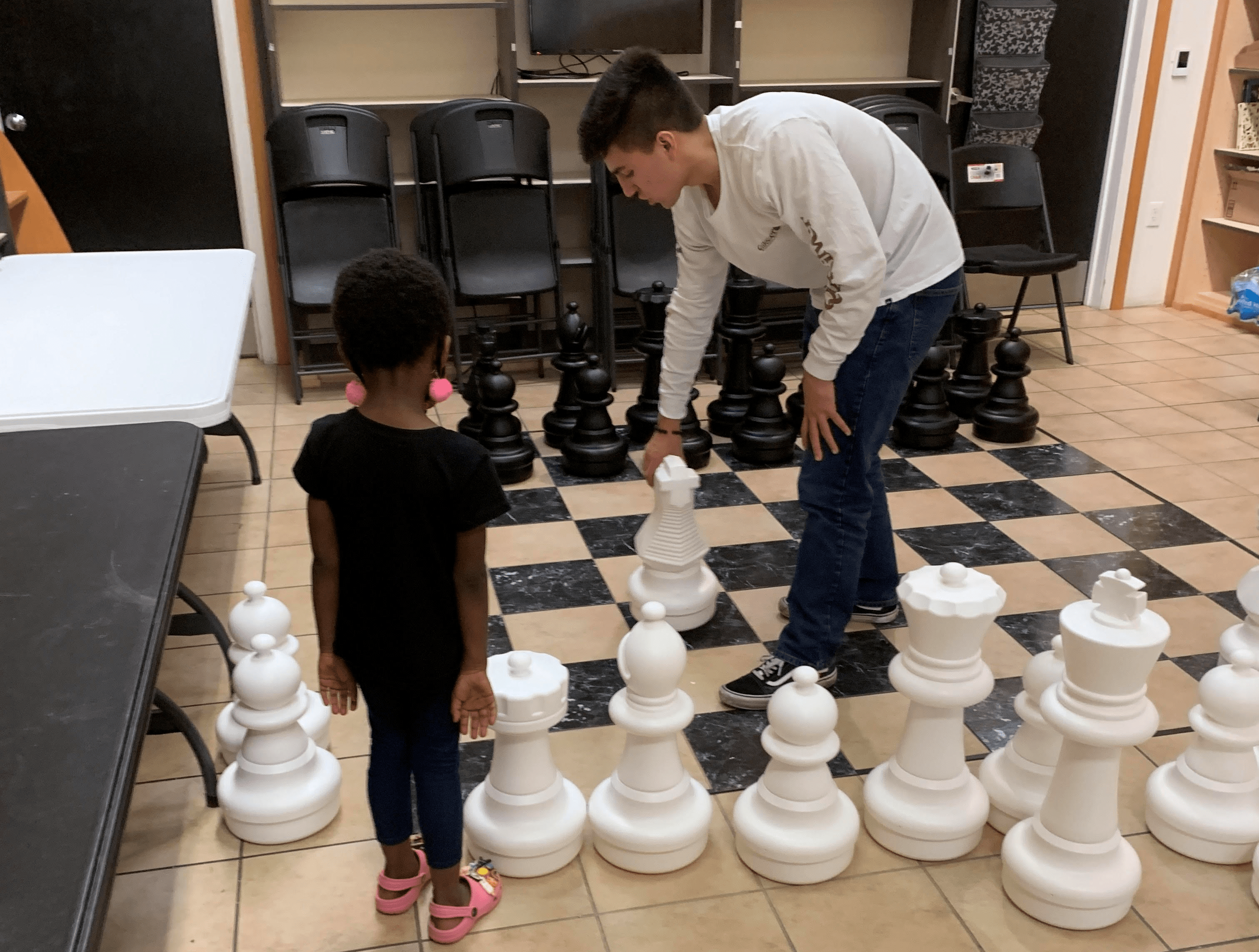 Molly Coy, founder and head of Coy’s Camps and Classes shows us that it is never too late to start and teach chess! We recently got the incredible opportunity to sit down to chat with Molly Coy, who is building a chess revolution in Tucson, Arizona, with her super fun chess camps.

Molly, along with her son Matthew Coy, is on a mission to boost kids’ cognitive and logical development with her immersive chess coaching camps. This is the first part of a two-part interview where we discuss how she got introduced to chess, her coaching camps, and her recently published chess book. Here’s how the interview happened.

First of all, thank you for taking the time out of your busy schedule for this interview. We are super excited about this opportunity, so yeah, let’s get started right away!

Firstly, we would like to know how you were introduced to chess and some of your earliest playing memories?

As a toddler, I would play with my Grandfather’s chess set (not chess… just playing with the pieces). I inherited that set, which I still have to this day. I played socially growing up and played on my junior high chess team for a short time. However, we never really had instruction. I played in one chess tournament but barely remembered it. I really got more into chess once I became a chess mom.

Moving ahead a bit, when you were a kid playing chess, how different was the level of enthusiasm for the game compared to now?

Within the junior high chess club, I remember people enjoying it, but I don’t recall seeing the level of enthusiasm that I see now. However, around that time, one of the National Scholastic Championships was held here in Tucson.

I wasn’t aware at the time but found out later. Unfortunately, there was a kidnapping of two kids at that event… one escaped and survived. The other didn’t. I believe my parents knew or worked with the child’s parents, who did not survive. As it turns out, my son’s high school coach was in that event and did very well. Since nationals were here, I suspect that there was a high level of enthusiasm here… I just wasn’t in the mix of it.

Did you have any chess idols growing up?

I didn’t really know who any were. I enjoyed the game but didn’t become so aware of all the competitions until it became a part of my kids’ lives.

Did you have any chess teachers when you were a kid? Can you share some stories about them?

I had one coach. I actually heard mention of him once a few years ago. My main memory in that club was that the other kids kept getting me with the four move mate. He wouldn’t show me how to avoid it but rather kept playing over and over until I figured out how to prevent it.

Can you share your chess coaching story/background before signing up with Chesslang, and how did you find us?

When my kids found my Grandfather’s chess set, they asked me to teach them how to play, so I did. They were around kindergarten and first.

My younger son, Max, took to it and loved it. I enrolled him in a chess program, and he showed real talent. When he hit 1000 rating in 3rd grade, I took him to Supernationals 2013 as well as the National Open. Since then, we have attended a Nationals every year until they were canceled due to Covid.

It took a few more years until my older son, Matthew, became truly interested in chess. But when he did, it became obsessed. He studied around five hours a day on school days and more on weekends. In his 7th grade year, he went up by over 1000 points. He is now gaining on 2000. He is our instructor.

Meanwhile, while they were playing and growing up, I got tired of just sitting around for hours at tournaments, so I asked about becoming a tournament director. I learned that and started playing in a tournament or two each year to keep perspective on how the players feel. I actually won my first trophies in the 2019/2020 year. I was probably more excited than a kid winning.

I also helped coach the team at the elementary school I taught at. I am not your typical coach that played growing up for years and turned it into a career and had my kids follow me.

I am a person who, when my kids are passionate about something. I do everything I can to encourage them.

My chess involvement followed them. As I paid attention, I saw all the other benefits it provides, and that was what got me to create our academy. We have now turned chess into somewhat of a family business.

My oldest son (and occasionally my younger son) is our primary instructor. I am our tournament director and run the business side. I am also a chess parent guide of sorts. I help parents, in addition to the kids, navigate the rules and procedures for tournaments.

You recently wrote a chess book, “Twas The Day Of The Chess Tournament.” How was the experience of writing a chess fiction book? Can you please tell us a bit about it?

Here is the funny part. I actually wrote that story in about an hour a few years back. It is set to the rhyme and rhythm of the classic poem “The Night Before Christmas.” That allowed me to have a framework to create the story.

It is the short tale of a young team attending their first chess tournament. However, rather than any actual teaching about the moves of chess, it is focused on the emotional side of a first tournament. There is the initial excitement when seeing the trophies on display and wins while also showing the disappointment for the child who struggles because he is not winning.

There is also the coach’s struggle of being happy for some while comforting the one struggling. The characters are based on a combination of kids I have had. They actually do not have names in the story partly because they represent all my young players. There are many books that can help kids with how to play in a tournament.

This one is to help understand how they may feel in a tournament and that it is ok to feel sad if you don’t do well. But you just don’t give up.

We originally started our academy in a small location in October 2019. It was big enough for private lessons, small groups lessons and camps, and small tournaments. Unfortunately, a few months later, Covid hit, and we were basically at a standstill just paying rent.

We attempted to go online, but online was just frustrating… especially for Matthew after attending school online and for me teaching elementary online. This past summer, an opportunity arose for us to relocate to the mall.

With our city opening up more, we decided to take the chance. We officially opened the weekend of July 31/August 1st. The location is great, and we are building up a clientele from people who just see us in the mall. We try to offer some other classes as well, but people are primarily just interested in the chess offerings.

You run a fun, and immersive learning camp with chess as a central focal point for elementary school kids, keeping their stunning achievements in mind. Do you think chess should be made compulsory at all schools?

This is a very interesting question because years I have taught it in my class, I have seen good growth, but I also happened to teach the advanced class. At one point, I did think it should be required in school. I would definitely like to see the basics taught along with the life skills. At the same time, I am not sure it should be required for all. We might actually lose some people if it was needed. I do think all schools should offer it as a club or elective. I really want people to love the game or at least the benefits gained from learning the game. I am afraid we might lose that love if all students were forced to take it as a class.

Coming up: we talked about some chess coaching tips,  the impact of the recent pandemic on the chess world, and the role of Chesslang in helping Coy’s Camps and Classes through this tough time. Make sure you follow us on our social media platforms and check our website for updates on part 2 of this interview.

As the game continues to expand in popularity and many new players begin their chess journey each day owing to the many online playing platforms, chess coaching has become a feasible employment option for many chess players. Chess tutoring is a fantastic method to make money while also helping the future generation of chess players by sharing your knowledge and expertise.

If you want to build your own chess teaching academy, Chesslang is the best place to start. Chesslang is the first chess tutoring and management platform globally, allowing chess academies to expand their reach through a virtual platform swiftly. Our automated management tools ensure that your academy’s daily operations operate smoothly, leaving you to focus on chess instruction.

Get Free Mobile App for your Chess Academy by registering here: ‘https://chesslang.com/mobile/‘

Q. Why should I get the new mobile app?
A. Turn every new download into a potential lead with our new mobile app. Grow your chess coaching academy faster when you join the Chesslang community.

Q. What are the benefits of the new mobile app?
A. The mobile app comes with thousands of lessons, activities, and levels to help you build fully immersive experiences for your chess coaching academy.