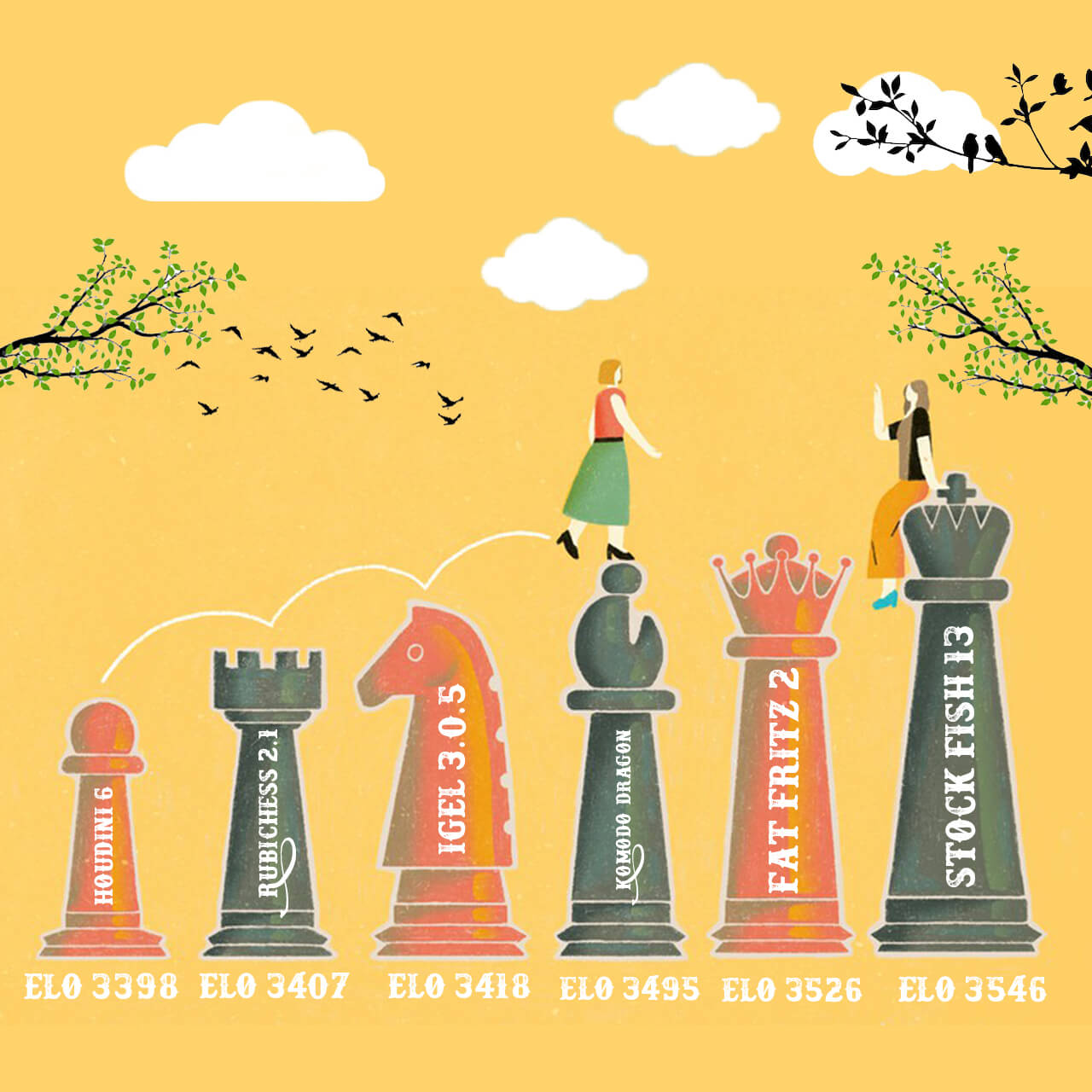 Chess engines have come a long way, from the first chess-playing computer, deep blue, that needed an entire floor filled with transistors and circuit boards to even come close to the strength of Garry Kasparov. Now the most powerful engines use AI and cloud computing to find chess ideas that are too deep for any human to ever see.

These super-strong chess engines are rated several 100s of Elo points more than any other human player and are a clear testament to how far artificial intelligence and machine learning have advanced over the past few decades.

Even Garry, one of the greatest to ever play the game, and the first human to lose to an engine, has now turned into a passionate advocate for the increased involvement of chess engines in top-level chess.

But all of this begs one very important question. If chess engines are so strong, and if someone has the access to said engines, what can a chess coach add to your prep?

This is one of the more common questions that every chess amateur wonders about. And in this blog, we will try to break down how a chess coach guides the player and even helps him with his engine preparations.

(Chess.com often awards a brilliant move to moves that are in-fact forcing in nature, proving that even engines are not perfect and they can also miss certain moves)

Understanding The Idea Behind The Best Move

Today, every online chess-playing platform, be it chess com or lichess or chess24 has integrated chess engines.

Players can quickly ask for a computer analysis of their game and see all the mistakes they made in their game.

These websites also make watching top-level chess games fun by including the evaluation bar. The “bar” has made chess accessible to a vast majority of people who lack a deep understanding of the game.

(The 2020 chess olympiad was streamed live on Samay Raina’s YouTube channel and it had over 75 thousand concurrent viewers. All thanks to the massive global chess boom in the past 2 years)

But what the chess engines lack is their ability to explain the ideas behind the move. Stockfish 14 is the most powerful chess engine now. It can tell you the best moves in any given position, no matter the complexity, within a few seconds. But it cannot explain the core idea behind a move, or why sacking the knight is the best move in the position.

This is why we need human intervention. As chess commentators are needed to explain why the “bar” is giving a winning advantage to one side. Chess coaches are needed for players of all levels to guide them through the engine moves.

Great coaches don’t try to compete with the engines, instead, they work alongside the engines. It’s the coach’s job to study the engine’s recommendation, to decode the ideas behind the best moves, and then to explain them to their students.

The Best Practices With Chess Engines

If you don’t know what a +4 advantage for white (or black) means, no matter the strength of the chess engine that you use, you will reap no benefits from it.

But if you stand on the other side of the spectrum and you do understand this, you will also know that as we keep getting better at the game, the more we take the aid of chess engines. As we get stronger at the game, we also understand the engine’s suggestion at a deeper level.

But no matter if you are just an intermediate player (<1600 Elo) or you want to finally push for the master title, the following practices are always great when it comes to analyzing your games with any chess engine.

1. Improve Your Positional Understanding – if there is one thing that chess engines are masterful at it is positional play. Positional play is the art of putting your pieces on the best squares and restricting your opponent’s movement, thus slowly suffocating them to death. Beginning with the Alpha Zero revolution, chess engines have shown us how sacrificing a pawn or two to get complete positional dominance can be a powerful way of playing the game.

2. Boost Your Tactical Sharpness – A very powerful computer engine might be intimidating, to say the least. You’ll be under constant attack by the computer, which will hone in on any apparent weak points in your defense. Any attempt to counter the flaw is immediately crushed by an unanticipated tactical blow. Anyone who has faced off against a powerful computer engine knows how frustrating it can be to play against one.

Being able to turn a winning position into an even better one requires exceptional tactical skills. If you miss a tactical opportunity in chess, you might as well surrender any advantage you had in the game right there and then.

If you’re going to face strong opponents, you’ll need to have excellent tactical and visual skills.

3. Find New Opening Ideas – Modern Chess engines are not fed with tons of chess theory to play the game. Instead, they are programmed to find the best move in any given position. Thus they become powerful tools to find out new ideas in standard openings and thus allowing you to trick the next opponent you face!

As Bobby Fisher said, “I don’t believe in psychology, I believe in good moves.” So should be your approach when using the engines to better your chess.

What do super GMs even learn in their chess training sessions? If a super-GM is a couple of hundred Elo points stronger than his coach, what can the coach teach him? These are questions that most of us have wondered about when we watch these top chess grandmasters play.

But the fact remains that all the top chess grandmasters of the world have a team of coaches and seconds to assist them in the preparation. Magnus has Peter Heine Neilsen, while Nepo is currently training chess with Peter Leko and the list goes on and on.

Quite simply put, the coaches of the super GMs help them run very deep engine analysis and then put the ideas in simple and easy-to-understand terms.

While the super-GM is busy playing chess games or solving tactics, the coach can spend hours in an opening and try to find new ideas in it, or even go through an opponent’s repertoire and find his weaknesses.

(In one of the greatest chess games ever played, Vishy Anand played a pawn move so deep that even engines missed and only understood its full strength after he played the move.

Because computer engines have become so powerful, even the top players in the world can’t compete with them anymore. Let alone beat them.

However, we must resist the temptation to let the savagery of computer engines diminish our enthusiasm for the game. We must make the most of not being computers by embracing what we have to learn from them.

Coaches of today must adjust their teaching techniques and incorporate engine analysis to further improve their chess coaching abilities.

Online coaching has several benefits over its offline counterparts. Such as, they are more convenient, more accessible, can have a wider reach, and also have better-integrated chess coaching features. This is why more and more chess coaches every day move from traditional chess academy to online chess academy

Sub-coach Management: 5 commonly faced issues and how to overcome them